Tweet
Share
Pin
Share
0 Shares
Rising from the ruins of the Aztec capital Tenochtitlan – Mexico City has museums both contemporary and historic as well as world class restaurants and vibrant parks making it the colourful, vibrant, cultural and contemporary city that it is today.

When I arrived at the airport in Mexico City and I must admit that I was expecting a poor city with plenty of people on the street, poor housing and as the Minister of Culture said to us at breakfast on our last day, I expected to see men with donkeys hanging around wearing sombreros!

Breaking News!! Mexico City is nothing like I imagined!!
We arrived at 04:30 in the morning in the dark, waking up to a beautiful sunny day and fountains in the square opposite our first hotel.  Three hours sleep, quick shower, breakfast and the start of a full packed week getting to know the best of Mexico City!
Here is a quick roundup of our trip.  Many of the places will be followed up in detailed blog posts to come:-
A quick trip out of the city, about 30 miles north east to the State of Mexico (Estado de Mexico) we arrived at the archaeological site of the Teotihuacan Pyramids, large stone pyramid shapes dating back to approx 300-600 AD in what was called The City of The Gods. 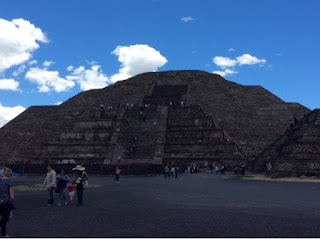 We looked around a tequila museum, had a private Mariachi band play to us, discovered the Mercado de Carmelo as well as experienced some great restaurants and we were only half way through our visit.
Part two of my Mexico City round up will follow shortly. Keep your eyes out to find out what else we discovered.
I was the guest of The Mexico City Tourist Board
Tweet
Share
Pin
Share
0 Shares
Author: Heidi Roberts
Filed Under: Uncategorised
Tags: diego Rivera, Dolores Olmedo museum, Estado de Mexico, Frida Khalo, Live It to Believe It, Mexico City, Miariachi band, tequila museum
Noodle and Vegetable Stir Fry – Quick and Healthy Supper
Borderfields Cold Pressed Rapeseed Oils